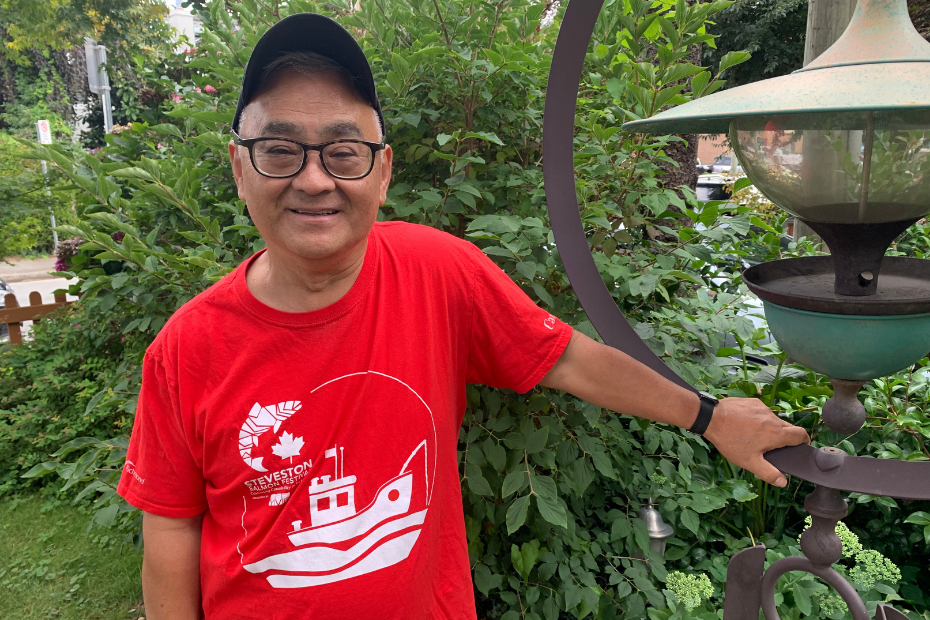 When the BC government gave a $2M Fund to the Nikkei Seniors Health Care and Housing Society as an initial fund for survivors who were impacted by BC Government actions 1942-1949, it became a big project for the Steering Committee to first hire a project manager, and then mobilize a small fund across a survivor population which spans the country.  Those details are here.

Finding the underserved seniors has been a focus of the project office and we want to get more individuals involved in looking for seniors. Thank you to Chuck Tasaka who began his search for seniors when he got the call.  We are lucky to have Chuck Tasaka whose aim is to comb the BC Kootenays and find each and every living surviving senior.  This is how we want the community to get engaged.

How did you get involved with this project?

Who have you met in the Kootenays…describe where they are and how do they live?  Are these Japanese Canadians who never left once they were relocated?

I tried to contact Nancy (Asahina) Yamamura, but she wasn’t home.  The next day, I saw Matsuko Irene Terada working in front of her house.  I stopped and asked if they could write down all the survivors in town.  She and Nancy got together and gave me the list.  They had post-1949 list too.  Good thing Greenwood still has a phone book.  Then, I added a much younger Nikkei living in Greenwood.  I counted in total 31.  Adding Midway which is our “Kissing Cousin”(not an official Internment site), and they have seven Nikkei.  I thought why not get all the Boundary Nikkei so I was so surprised to find out that a lone Nikkei lives in Bridesville.  She might be the first!  Her husband Gus Bourgh was a classmate of mine in the early 60’s, but I didn’t know he married a lady from Vernon.  Her name is Marie (Ouchi) Bourgh.  She has lived in Bridesville for over 50 years!  Then, she told me she knew my second cousin Dan Nakatsu in Westbridge.  On Facebook, I found out that Bert Uchiyama also lives in Westbridge!  He was from Vancouver.  I knew Ken Hamanishi and Seiji/Sachi Matsuo in Grand Forks.  Ken is formerly from Greenwood.  He’s 83 and lives with his wife Cec, and they still golf regularly.  Ken curls and plays hockey.  He brought some furniture to my place and my neighbour was shocked when he saw Ken jumped off his pick-up!  LOL! Then, a lone Christina Lake Nikkei passed away, Nobuko Hamagami, I found out her daughter Fran Farnworth moved back to Christina Lake.  Yes, with a little legwork and word of mouth, I think we have all of the JCs listed unless someone moved in recently.  We are not in the Kootenay District, but BOUNDARY DISTRICT.  Sadly, we lost five Nikkei this year.

Most are aging but small town people look after each other.  Hakujin neighbour across the street look out for Aiko Terashita after she lost her husband recently.  Another recent Nikkei who moved from Ontario, cuts the large lawn with a rider mower of a 90-year old JC neighbour. A bachelor all his life lives in a two-story house!  Doug Teramoto also drives him out of town for shopping.  In Midway an 87-year old Nikkei (came from Mio, Japan to marry a Nisei) has a Nikkei friend mowing her lawn and a hakujin friend takes her shopping and gets her mail.  Sakae Yoshida still lives in her house.  Her name came up four times to be accepted in a local Seniors Home, she declined.  I think most want to eat Japanese food.  I know she misses her friends who spoke Japanese, but they’re gone.  I go visit her to speak Japanese with her.  One Greenwood elderly man moved to Kelowna to be in a home.  I think there is a JC senior home there?  Another elderly is waiting to move in with his son in Kelowna.  As you can see, they look out for each other.  There is another 90-year old who came from Ontario, moved to Greenwood 20 years ago.  He still drives to Grand Forks to shop!  He lives alone and independent.  Neighbours keep an eye.  And, the healthiest JC is 93 years old (John Ikari) and he still goes fishing at Jewel Lake regularly with his wooden boat that he built!  Amazing!

What do you feel their needs are?  What do you think we can do for seniors in the remote areas of BC?

I think as they keep aging, getting Japanese food may be a challenge. They used to drive to Kelowna Costco or Korean Store.  Another is the hospital is not nearby.  If they require an ambulance it cost $80 to Grand Forks Hospital, $150 to Trail and $250 to Kelowna.  In a remote area, doctors are not readily available.  I think that is the biggest challenge.  To see a specialist, Kelowna might be the closest.  It’s over a two-hour drive.  Since Greenwood accepted the JCs, it became the first Internment site.  It was not a “camp” because it was not segregated.  After the war, the city wrote a protest letter to keep their ‘new friends’ in Greenwood. Thus, JCs were not pressured to relocate again as in “Go East of the Rockies or to Japan”.  Around 700-800 JCs made their homes after the war.  JCs were even allowed to operate their businesses.  Barber, plumber, dry cleaner, shoe repair, cafes, doctor, etc. during the war.  The locals welcomed more amenities.  What we can do for JCs in these remote areas?  Maybe more communication?  For example, have the JCCA Bulletin available for everyone.  Accessibility?  Senior homes like Nikkei Home or Sakura-so.  There are some Japanese speakers who married Nisei longing for Japanese food and to be able to see Japanese events.  However, they came postwar, so they may not be considered survivors.

Why do you do this work?

I reconnected with Greenwood when I wrote two books on Greenwood.  I felt that Greenwood was under-represented.  All I heard about Internment history was New Denver, Slocan, Kaslo and E. Lillooet.  Greenwood was just an asterisk.  What made me stay was when I started the Nikkei Legacy Park project.  Every time I drove past Greenwood, there wasn’t any sign or landmark that signified Greenwood as the first Internment location.  There was Ohairi Park that I didn’t know existed until I was informed. It was a picnic park. Since I told the City Council that I would maintain the park when they told me they had no money for maintenance.  Thus, I bought a summer home to keep my promise. The Greenwood Museum supports my project.

When I was told that there is a ‘Japanese park’, Ohairi Park, I was disappointed after seeing Kohan Garden in New Denver, Friendship Japanese Garden in Hope, Momiji at Hastings Park prior.  I decided to upgrade the park because the infrastructure existed.  The open gazebo had potential.  I wanted to make a JC or Nikkei Park, not Japanese Garden.  With my Kool-Aid budget, I thankfully receive a generous grant from NAJC to kick-start the improvement and I covered rest of the expense.  Flooring and half-wall was added.  Then, I wanted to start a family plaque project so that former Greenwood people would return as in ohaka mairi.  I now have over 100 plaques.  I also wanted it to be inclusive with Hakujin smilies included.  Therefore, the plaques are not Internment families only.  It costs $200 to get the plaque made.  From there, I initially wanted to plant Sakura trees, but it was too risky due to the cold weather and poor soil at the park.  It was once a swamp therefore the ground is full of large stones and gravel.  As a result, I changed to graphic Sakura Blossom Memorial plaque of their loved ones who passed away.  That is a $1000 donation.  My major project was to erect a WWI JC Memorial monument of the 12 war vets who were sent to Greenwood.  Three were military medal recipients, Masumi Mitsui, Yasuo Takashima and Kiyoji Iizuka.  Last two stayed in Greenwood after the war as well Y. Kuroda, T. Nitsui and T. Kitagawa.  Mr. Kuroda is the only one buried in the Greenwood Cemetery.  Others were N. Okawa, H, Isomura, I. Uegama, Y. Fukaye, K. Shimizu and T. Kuroda (briefly). A polished granite plaque is to be attached to the large boulder as well as the interpretive panel.  I have the three Vancouver Asahi players who were sent to Greenwood.  Jim and Joe Fukui were part of the 1938 three championship victories.  Both lived in Greenwood after the war.  Ken Kutsukake lived briefly in Greenwood before joining Naggy Nishihara in Kaslo.  Again, NAJC has been so supportive of my project with their grant.  Dr. Bob Miyagishima donated to have the “ We Lived Together” panel made.  Greenwood set an example of how the community showed Acceptance, Integration and Harmony.  Many private donors and local Greenwood service groups have donated to keep the local Internment history alive.  .  The Isomura/Imai families donated the lantern and the taller lantern was donated by Stephen and Dianne Tasaka.  The memorial bench was donated by Stephen and Dianne as well as JR Dale Management.  Local groups donated the Nikkei Legacy Park illuminated sign.  Private donors bought family and Sakura Blossom plaques.

What is your personal connection to this story?

I was born in Midway, just 13 km west of Greenwood in 1945, not in a hospital, but behind a beer parlour!  Midwife was Mrs. Yoshikawa. My parents moved back to Greenwood in 1946.  Therefore, I attended kindergarten to grade three at Sacred Heart School run by the Franciscan Sisters who operated a Japanese Catholic Mission on Powell Street and in Steveston in 1926 and 1931 respectively.  When SHS closed down due to dwindling enrolment in 1954, I attended Greenwood Elementary-High School and graduated in 1963.  Teaching profession was not my calling but it happened.  I taught intermediate grades for 33 years in the Ladysmith-Nanaimo District from 1968-2002.  I continued coaching (Jump Rope For Heart Demonstration Skipping team) after my retirement until 2010.  From then on, I focused on Japanese Canadian history.  I read voraciously.  Any book I could get  a hold of, I read.  That’s when I decided to write a book about our childhood games that were so unique titled “Hanatare Bozu, Runny-nosed Brats of Greenwood”.  For some reason, I wanted the second book to be family history of those who lived in Greenwood.  I wanted to be inclusive therefore I added the pioneer families.  That way, there is a connection on how Greenwood integration worked.

Thank you Chuck Tasaka for all you do!!